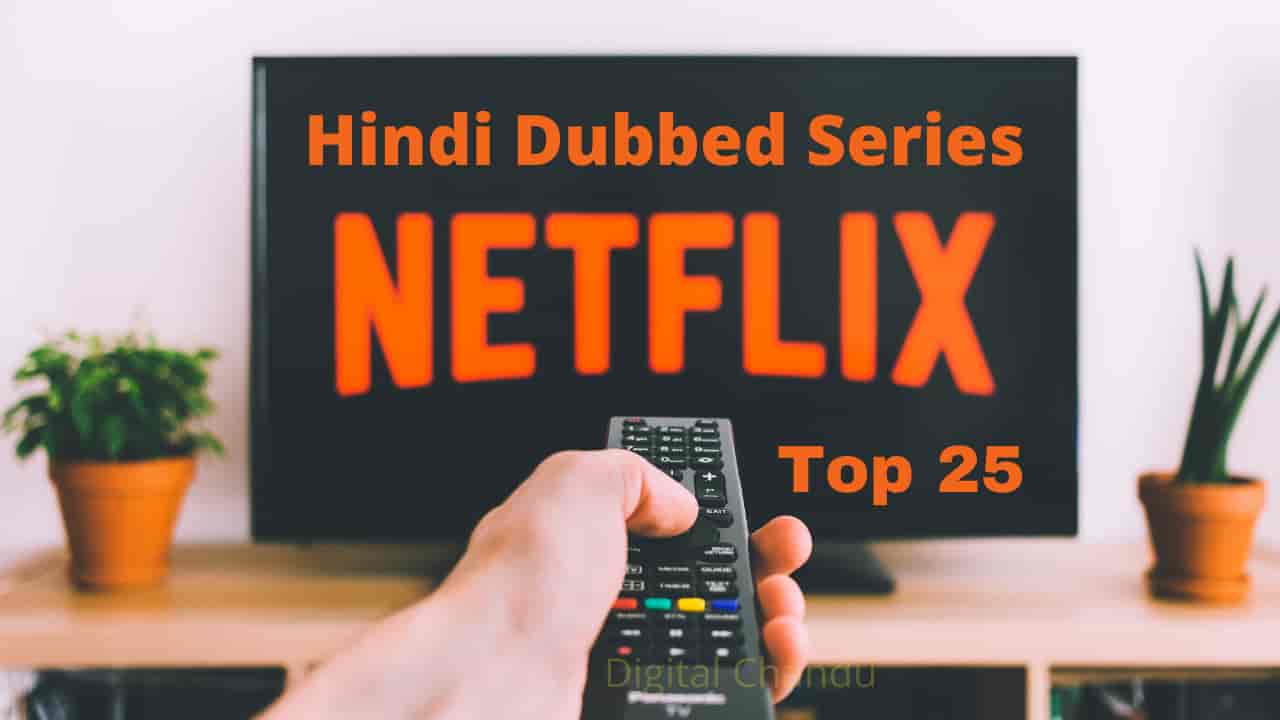 Netflix is now the most used OTT platform in India for streaming its services. Netflix offers a broad range of content including documentaries, movies and series from Hollywood, as well as Bollywood. Since its inception, Netflix has produced many amazing movies and web series from Indian origin.

At first, Netflix allowed users to stream Hollywood series and movies in English. Netflix began to offer content in other languages due to an increase in viewership. Dubbing isn’t easy. It requires synchronization between the screen timings of dialogues.

Netflix is increasing the number of Hindi-dubbed series it has. They have also recently begun dubbing shows into many other languages, such as Marathi, Tamil and Bengali. We have listed some of the best Hindi-dubbed series on Netflix in this article.

The British comedy TV series “Sex Education” premiered in 2019. The story follows Otis Milburn (a teenager who is insecure) and his mother, a Sex Therapist. His mother, a sex therapist, is very familiar with the subject of sexual problems. Otis and Maeve start a sex business at school to help other students with sexual problems.This series also focuses on LGBTQ relationships. It is a popular Netflix series and it is now available in Hindi.

Based on a Marvel Comics character, Daredevil is the basis of the series.Matt Murdoch is a lawyer and a daredevil in the night. He is blind but has supersenses and fights crime on the streets of New York City at night. He juggles his lives as a lawyer and Daredevil while meeting many other characters from The Defenders. This series is a must-watch for Marvel Comics fans and it’s also available in Hindi.

Lucifer is an American TV series directed by Tom Kapinos. The series’ plot revolves around Lucifer Morningstar (Tom Ellis). He becomes bored and ends up in Los Angeles where he starts his own nightclub.He fell in love with Los Angeles detective Chloe Decker.Will the Lord of Hell turn to the good side? You will be amazed at the results.

Narcos is a popular online series that tells the story of the Colombian drug lord Pablo Escobar. Originally in Spanish, this series has been translated into English and recently, Netflix added Hindi dubbings. It received an impressive 8.8 IMDB rating. It tells the story of how cocaine cartels grew and spread around the globe.

Luke Cage is an American series of superheroes based on Marvel Comics’ character. It came out in 2016.It includes intense action superheroes, crime scenes, dramas, etc. The Defenders features Luke Cage as well as Jessica Jones, Daredevil and Iron Fist. This series is for those who love superheroes.

This series was a huge hit and many people have seen it. “Stranger Things” is a web series that focuses on science fiction horror. It is now also available in Hindi. The series centers on a young boy who disappears. His friends, his mother and a police chief face frantic supernatural forces in an attempt to find him.

Altered Carbon is a Science Fiction web series that was released in 2018. It’s a futuristic series set in the future, and takes place more than 300 years ago. It shows the technological advances that allow consciousness to be transferred into another person’s body. This series is for sci-fi and futuristic movie lovers.It is now available on Netflix in Hindi. Altered Carbon is my favourite Hindi-dubbed Netflix series.

The Vampire Diaries, an American supernatural television series, premiered on September 10, 2009. It quickly became a hit tv series. The pilot episode made an immediate impression on viewers. It received numerous award nominations, including four People’s Choice Awards and multiple Teen Choice Awards. Before Arrow took over, it was the most-watched show.

In 2013, Orange is The New Black came out. It boasts an impressive 8.1 IMDB Rating. It has comedy, drama, and crime. The series was nominated for Emmys in drama and comedy categories. Piper Chapman is the protagonist of the series. She is given a sentence of one and a half years imprisonment and her life begins to change as she confronts reality.

Michael Hirst created Vikings. It premiered March 3, 2013. It is a historical drama. The story centers on Ragnar Lothbrok who is a Norse farmer and thirsty for scrutiny. He becomes the Northmen’s king. His family and men are driven by ambition and a desire to be the best. This series is available in Hindi if you enjoy series about history and ancient warfare.

Lost in Space is an original science-fiction series on Netflix that was released in 2018. It is set 30 years into the future and is a remake from the 1965 series. The series is a fictional story about a young family exploring alien lands and trying to colonize them. The series shows how they overcome unexpected odds and how they survived.

End of the Fucking World, a British movie, was premiered October 24, 2017. The series centers on James, a 17 year-old boy who believes he is a psychopath and Alyssa who is an angry classmate. She sees a way to escape her chaotic house life by finding a way to connect with James. After some tragic events, they embark on a trip across England and begin to form a romantic relationship.

The Spy was released in 2019 and received a 7.9 rating by IMDB. It is one the most watched Netflix original series. It follows Eli Cohen, a Mossad spy. It reveals Eli’s past, and how he infiltrated the Syrian Ministry of Defense. It is a series about spy and history that you should watch. Available in Hindi on Netflix

Chilling Adventures of Sabrina, a fictional series, is based on the Archie comic books of the same title. The story follows Story of Sabrina Spellman, who is half-witch/half-mortal. This series includes horror and witchcraft. As a mortal she grows up and becomes close to her mortal friends. She refuses to be a witch, but she does become affectionate with them. The series shows all her adventures fighting evil forces.

The Society premiered in 2019 and is one of the best Hindi-dubbed Netflix series. Christopher Keyser created the American mystery drama series. The story centers on a group teenagers who must learn how to manage their own community after the rest of their friends disappear. To survive on a limited budget, the teens have to make their own rules. This series is available on Netflix in Hindi.

House of Cards is a Netflix Original Series with an 8.7 IMDB Rating. It was launched in 2013. The series, which is classified as a Political category, centers on Frank Underwood, a shrewd political figure, and Claire, his manipulative, diplomatic wife who are determined to take control. It is now available in Hindi and many other regional languages.

“You” is a TV series about psychological thrillers that premiered September 9, 2018. It belongs to the Drama, Crime, Romance genre. The story follows the adventures of a bookstore manager who falls for a young woman who dreams of becoming a writer. Things get out of control after a while, when all the lies start to surface, and the mystery is revealed.

Ozark, an American series that combines Drama and Crime, was premiered in 2017. Starring Jason Bateman as Laura Linney and Laura Linney playing a couple who move to Ozark, Illinois from Chicago in order to launder money. This series is filled with intense thrills and illegal activities that spin the money to ensure the survival of the family. It boasts an 8.4 IMDB rating. This is a great thriller series to watch on Netflix.

It’s an American teen drama television series that premiered in 2017. Based on Jay Asher’s novel 13 Reasons Why, it is set in the United States. Clay Jensen is a high school student who becomes friends with Hannah Baker, a suicide victim. A box of cassette tapes is left behind by Hannah Baker, which contains the reasons she made such a terrible decision. The tapes eventually exploit her plight and reveal the reasons. The series is now available on Netflix in Hindi.

Russel Peters plays the lead role in this Netflix original series. This is the story about a Toronto police officer. He’s investigating a case, and ends up in Mumbai.

This show, despite its Indian setting, is available in English. Hindi subtitles were added to make it more accessible. The Indian Detective is a Netflix series in Hindi that you should watch..

Great News, an American sitcom, premiered on Netflix in 2017. It’s the story of a woman who finds herself in a difficult situation when her mother offers her a job at her place.

This sitcom is very popular and has great writing. This series is great for those who want something easy and light to watch.

Happy! Netflix released Happy! in 2017, a series of crime thrillers. Based on the graphic novel, this series was created. This is Nick Sac’s story, a corrupt ex-cop turned hitman.

The platform has two seasons and they are both available in Hindi. Happy is a fascinating series, so you should give it a try.

An awkward teenager boy was forced to return to middle school despite his anxiety. A dog named Dude comforts him. This comedy series is for you if you love dogs. The 8-episode season premiered in January this year. If you’re looking for something lighter, you can binge watch this series over the weekend.